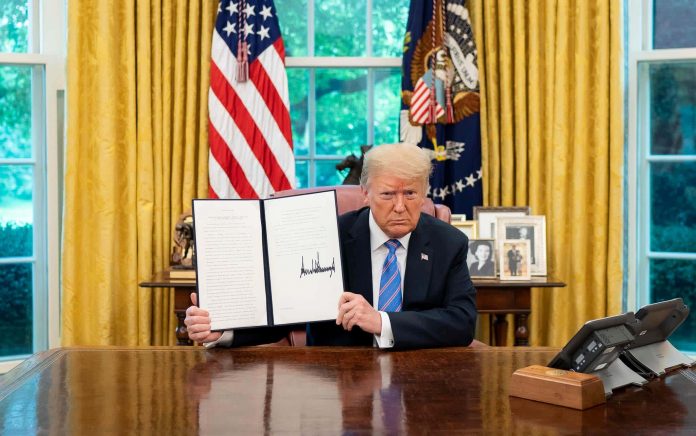 (ConservativeHub.com) – Many discussions about politics begin and end on the topic of the presidency, and the power of the White House to bring about developments of one kind or another. However, the Senate and House of Representatives are responsible for writing the laws that govern us; the president merely has the power of veto over them.

So, does that mean the president has no way to effect change on the ground? Not quite. Through executive orders, the president can exercise a range of powers.

What Is an Executive Order?

An executive order is a directive that manages the activities of federal government bodies and agencies. The authority for executive orders comes from Article II of the Constitution. There are also various legislative acts that refer to the authority of the president to hand down directives.

The president does not have to consult other government branches to pass an executive order. However, the Supreme Court can strike down a directive that’s constitutionally offensive through judicial review. Congress can also indirectly impede executive orders by, for example, removing funding.

Some presidents choose to implement executive orders extensively, while others use them far less. Every president has signed at least one.

What Can the President Do With Executive Orders?

The president can use executive orders in a variety of ways.

One of the main areas in which executive orders come into play is law enforcement. Because the FBI, CIA, Department of Homeland Security, and other policing groups are federal agencies, they must accept presidential orders. By issuing directives to border authorities, the president can also exert a lot of influence over immigration policy.

Because they don’t emerge from the normal legislative process, there are strict limitations on what executive orders can do. A directive cannot act to give more power to the president, for example. An executive order should generally only give effect to a power the president already has, whether under the Constitution or statute.

To ensure no president attains too much power, the Constitution limits the office’s capacity to set down rules by itself. Sometimes, though, swift action is necessary. Through an executive order, a president can intervene in a situation quickly and efficiently, without having to wait for Congress to agree on a strategy.